Hiking in Granada whilst learning Spanish in Spain

It cannot be denied that Andalucía (especially the province of Granada) is one of the most beautiful areas of natural beauty in all of Spain. So when learning Spanish in Granada with our Spanish language school, it goes without saying that you have to take advantage of the stunning scenery and go hiking. There are many places that are easily reached from the city using local bus routes, all of which will cost you less than couples of euros!

Views over the Sierra Nevada

As our Spanish courses run from Monday to Friday, you can make the most of the weekends by climbing to the highest peak of the Sierra Nevada, which is also the highest peak in mainland Spain at 3497m! Or you could go for a hike in the Alpujarras, an area of incredible natural beauty and the typical whitewashed mountain villages of Granada. Like every student has a different level of Spainsh, the Sierra Nevada also offers routes for people of all different hiking abilities. Granada is a paradise to learn Spanish and go hiking!

During the summer months our Spanish language school organises hikes to Los Cahorros, a walking route from the nearby town of Monachíl. The route winds alongside a river of the same name (el Río Monachil) and across bridges that appear to float over the rushing waters below. There are also a series of little waterfalls where you can paddle- if you´re brave enough! Climbing up towards the peaks of the mountains, you are rewarded with amazing views of the area that you won’t soon forget; of both the valleys and the cherry groves which the area is known for. Don’t worry about losing your way- our Spanish teachers are experts at navigating the valleys and peaks!

What better way to learn Spanish in Spain than chatting with your classmates in the great outdoors? Along with the Cahorros, you can also enjoy the beautiful Güejar Sierra as part of the activities our Spanish language school puts on. A popular trip with our students, even the bus ride is enjoyable, offering panoramas across the sparkling blue waters of the Embalse de Canales reservoir. We walk along the banks of the river Genil (which also runs through the city of Granada, where our language school is located!), enjoying the stunning scenery and picturesque views. If you keep an eye out you may even spot the one of the few remaining Osborne bulls: the black silhouette of a bull standing atop one of the mountain peaks. 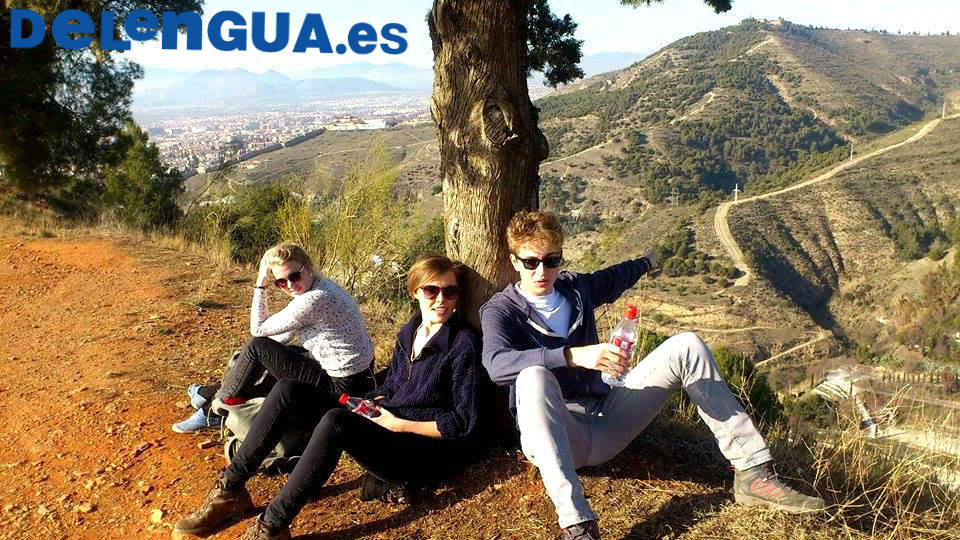 During your time learning Spanish in Granada, you have no excuse not to explore the Dehesa del Generalife, which is located on the mountains surrounding the city, just behind the Alhambra. By Walking up to the Silla Del Moro viewpoint with your classmates, you can survey Granada from above: the terracotta roofs of the city; the rolling green hills; the whitewashed caves of the Sacromonte; and even the Sacromonte Abbey (which you can also visit as part of an organized trip with our Spanish language school). Don’t miss the sundial at the top!

Feeling adventurous? Book a course with us today to come and explore all the beautiful places Granada has to offer! If you want to learn more about our Spanish language school, remember to like us on Facebook or follow us on Twitter.