Escuela Delengua organises Spanish courses the year round for individual students from all over the world who come to learn Spanish in the centre of the beautiful city of Granada, Spain. Throughout much of the year we also receive school and university groups for whom we create and organise Spanish courses for groups which are adapted to each group’s specific needs and preferences, from 5, 6 or 7 days up to several weeks.

In January we started the year with a group of students from the Estatal Lingüistica de Piatigorsk University in Russia, who took part in a 3 week Spanish course, integrating with other international students while undertaking intensive Spanish courses. In January we also received a group of 18 year old students from Nesbru Vidregaaende Skole, Norway, who stayed with Spanish families in the centre of Granada for a week. 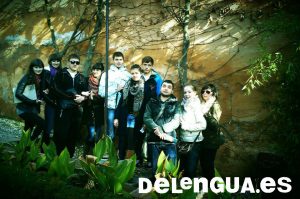 In February a group of 14 – 16 year old students from the City of London School came to stay with us for their third year. They undertook a 1 week Spanish course for groups, staying with Spanish families in the centre of Granada while they studied Spanish in the mornings and had guided cultural visits with one of our teachers in the afternoons. Soon after, a group of students from Colchester Sixth Form Centre visited the school. They also stayed with Spanish families and took part in a Spanish course and activities, including a visit to a Spanish secondary school so that they could get to know students of their own age.

In March we welcomed a school group from Rijlands Lyceum in Oegstgeest, Holland consisting of 9 students who took part in a Spanish course in Escuela Delengua and 25 students who didn’t speak Spanish and instead took part in a program of historical and cultural guided visits in English around Granada. 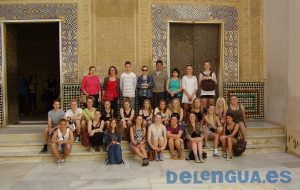 In April we had a group of school students from Viborg Katedralskole in Denmark who took part in activities we organised and stayed either with Spanish families or in hotels in the centre of Granada. 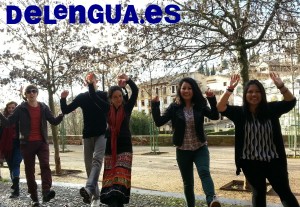 To all the students who have come to visit with school or university groups, and to their teachers; we would like to say thank you for the wonderful time we all had during your Spanish courses. ¡Muchas gracias y hasta siempre!

Make the most of your school trip to Spain to improve your Spanish while enjoying the charm of a city like Granada.